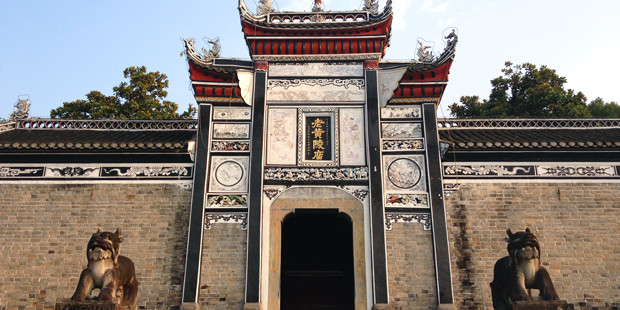 So I Went to China

All Aboard the Bullet Train and Boat

Seven hours on a train from Shanghai to Yichang are surprisingly pleasant in first class. The embarking process was efficient, our seats clean, comfortable, and roomy. We had some great views of the countryside, including my first glimpse of Nanjing – farms along water near a high rise. We turned our seats around to play cards. Some people brought ramen bowls to be prepared with the free hot water dispensers onboard, which are also common in transportation stations. Eric shared a bunch of tasty snacks – rice cookies, chocolate wafer bars, and spicy peanuts. The sweets were subtler than the typical American selections. I wish we had more like those over here.

The subsequent bus ride featured local guide talk about sturgeon and the infinitely more entertaining scenery of falling down drunks along the steep and winding road to the Yangtze docks. On the cruise ship, we received tea and a welcome speech, which I might have appreciated more if I weren’t so impatient to get settled.

Our Rewards Travel China itinerary had only mentioned the shore excursions included with the tour. Each day offered an optional excursion as well. This morning’s was a Disney-esque exhibition of local life on the river – a series of skits staged among the scenery. I skipped it in favor of hanging out with the others disinterested and exploring the boat, which turned out to be much smaller than it appeared at night in its multicolored neon splendor. Whenever possible, 4’s in the room numbers – unlucky, as the word in Chinese is a near homophone for death – were replaced by 8’s. The ship still had a 4th level. With a total of 5, I suppose it would have been awkward to skip that.

The afternoon brought us to the Three Gorges Dam, where we viewed a scale model and then looked over the dam itself. It’s a hell of an engineering project – a great source of hydroelectric power, a prototype for a larger dam in the works, but with the unfortunate effect of flooding out villages and historic sites. People were displaced to quickly constructed towns high on the river banks. Many of them make their living from tourists as prominently evidenced on the shore excursions throughout the cruise.

The first night was triply awesome. Hot oil bean curd at the buffet! Trip through the Three Gorges Dam locks! Discount buckets of beer! We drank up and talked a lot and squeezed past some railings for a better view at the end of the boat. The lock ascension process involved enough metallic groans and other such industrial noise for me to wonder if we had sailed into Silent Hill. 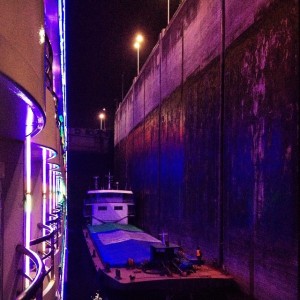 The morning’s excursion began with an hourlong ferry ride with our choice of freezing wind and cold seats up top, tolerable air and upholstery in the middle, or choking diesel fumes on the bottom. It also featured the worst bathroom in Scotland, which gave me a bonus headache from standing in line past the engine room. I am mystified as to how the people on the first floor could stand it without masks.

On the upside, the ferry staff announced views of river scenery and the hanging coffins wedged high in cliff fissures by ancient tribes. I also enjoyed the Shennong Stream rowboat ride, in which our guide Mary sang us a local song of friendship and we reciprocated with “Bohemian Rhapsody” and “O Canada”. Our fellow bus tourists from the north were amused that I knew all the words to their anthem. Thanks, South Park. 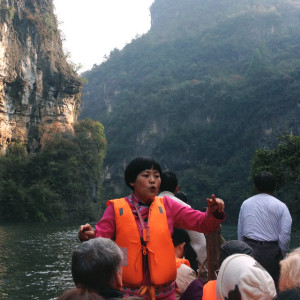 The optional afternoon excursion had been presented to us with the assumption that we wouldn’t be interested. I heard Three Kingdoms and nearly crapped myself. The destination was White Emperor City, the legendary resting place of Liu Bei. 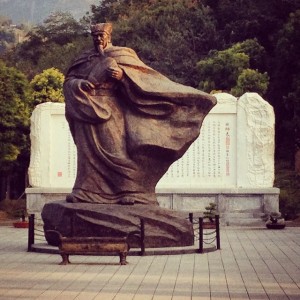 Our small English speaking contingent shared a bus with a much larger Chinese group. There were 300 steps to climb, down from 1000 at the Yangtze’s original level. Porters offered to carry people up for a fee. Spousal Unit said the asking price was unfairly low for his self-described fat American ass. Even so, we like pragmatic physical activity, so up the stairs we went. 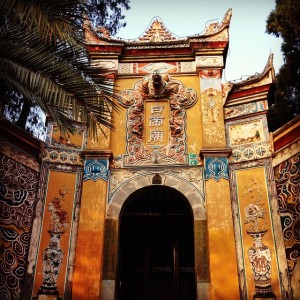 The November weather felt like summer in Pennsylvania until we reached the city, which was refreshingly cool and very green. Statues of Liu Bei, his brothers, and Zhuge Liang – unfortunately in alcoves too dark to photograph – had bodies from the Ming Dynasty and heads restored after being cut off in the Cultural Revolution. A diorama illustrated Liu Bei’s illness after the Battle of Yiling, said to have led to his death in this city. He was accompanied by various advisers, including younger relatives of his brothers and tiger generals. We spotted Liu Bei’s genealogy in another room but had no chance to view it. There were many engraved calligraphic pieces and rubbings thereof for sale, including works of Zhou Enlai and Chairman Mao. A small museum displayed one of the hanging coffins mentioned on the Shennong Stream ferry and difficult to see on that trip.

Each of the local markets on shore had its own distinct aesthetic. This one was all about clicking clacking toys – many of which were also sold on the long staircase – and dried and fried fish. And carvings of boxwood, a medicinal tree, though our guide warned us to beware of fakes.

Fengdu Ghost City is uniquely bizarre – a mountaintop collection of dioramas and statues illustrating traditional beliefs about death, ghosts, and the afterlife. The place was packed, and our guide impossible to parse over the others she was competing with, even though she wore a portable loudspeaker. I gave up on context and focused on photos.

At one point, we had to pass three tests of good or evil administered by staff in colorful costumes. These included taking the proper number of steps across a bridge and balancing one-legged on a brass ball stuck in the ground. I wasn’t sucked into the nearby death well, so I suppose I won.

Lunch had minimal meatless food, and none of it was substantial. I was too shy to say anything. Mother-in-law Linda, the opposite of shy, flagged down Eric, who summoned me a fantastic plate of shredded bean curd and three different greens, including some cooked with hot peppers. The wait staff even stopped back to see how it was. Freaking excellent, in all regards.

The ship put on a mahjong event in the afternoon.  Herbert, the English-speaking river guide, offered lessons after hearing enough interest from foreigners who didn’t know how to play. I missed those due to a gifted massage from the parental units. I ended up learning with one older fellow participating and another backseating, ensuring we understood why to keep or discard as he instructed. Mahjong is enough like gin rummy that I found it easy to pick up the basics. My main problem was remembering the numbers on a set that only had the hanzi characters. Edward, our participating teacher, wrote out a cheat sheet for us.

That night was a talent and fashion show. Our group had been asked to sign up as many people as we wanted to, which gave us three acts total. I love to sing, but I didn’t want to be at the mercy of the karaoke machine and the possibility that its version of a staple tune might be well out of my range. On a trip to Ireland back in high school, I sang a traditional song, learned from Chieftains tapes, in a pub in Doolin. I figured I might as well repeat such a performance halfway around the world.

Audience-wise, I had no idea what to expect. The lounge was packed. I shook off the initial deer in headlights trepidation and launched into “Star of the County Down” a cappella, seriously stoked to have the whole room clapping along. Next up was a large group dancing to “Single Ladies”, followed by Brian juggling an orange, toilet paper roll, and water bottle, Breanna and Andy beep beeping the microphone on occasion, and Spencer hanging out in his suave straw hat to catch any stray juggling implements. Some other travelers danced and sang karaoke. The ship’s crew danced in costume and gave a fashion show of various tribes’ attire. All told, the show was a much bigger deal than I’d anticipated, and a fun sendoff for the final night.

Chongqing was basically a stopover to hit up the zoo and see panda bears. The pandas were cute, happily munching bamboo, and dirty from chilling out in the mud. The rest was nothing extraordinary compared to zoos back home. I was more interested in people watching – group exercisers, a field trip of children in matching school jumpsuits, and an old woman adeptly juggling a shuttlecock like a hacky sack. She saw me watching and invited me to play. I klutzed it up and had to run off to catch the group anyhow.

We got a surprise bonus trip to the Flying Tigers Exhibit Hall, a small museum about the airborne supply operation over the Himalayas coordinated by General Joseph W. Stilwell as part of the Chinese-American alliance of World War II. There were a few display cases, text placards all over the walls, and an artist demonstrating traditional brush painting.

Chongqing is as incomprehensibly huge as Shanghai. My main sense of its personality was Constant and Major State of Flux, but I did see some nifty architecture. We walked through a plaza reminiscent of a collage, with a variety of modern building styles working well together. The overall look and some of the design elements – buildings as billboard, prominent rainbows – are also common in the other Chinese cities we visited.

Bomb shelter tunnels, dug into hillsides during the Japanese invasion, were repurposed as storage. A shopping street simulated a big box hardware store as stalls of specific item types, from water heaters to fixtures to piping. Our bus got stuck on a winding street up a hill. Residents came out to move chunks of rock off the road and push in the side of a parked truck so the bus could squeeze by. Eric explained that everybody helps because it keeps things moving – otherwise, no one would get anywhere. Though en route to catch a plane, I trusted the guides’ relaxed attitude about the patience of this process. We reached the airport in plenty of time.

The plane ride back to Shanghai had a movie I wish we could have finished. A guy with a ’70s bowl cut was on the verge of suicide, and another guy kept trying to talk him out of it. Cue repeated chronological flashbacks about how Bowl Cut screwed up his life, with lots of slapstick and cartoon sound effects. I’d never seen this style of live action outside the Three Stooges, which I loved as a kid. Someday I must track this down.

Read more about my work in general or in-progress novel.