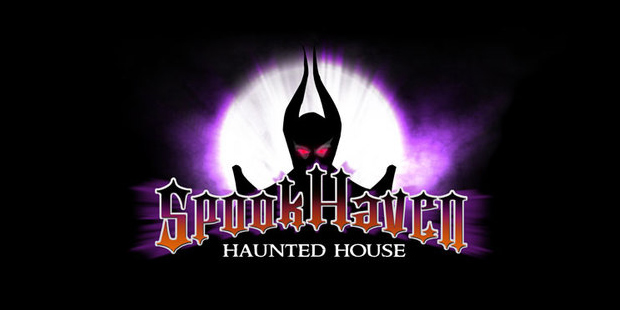 I first visited the Spook Haven Haunted House in 2014 after seeing it on a local Halloween event calendar. Being several years out of the haunted attraction loop, I wasn’t sure what to expect. Spook Haven impressed me with ace acting and handcrafted heart, and I looked forward to seeing it grow.

And grow it did. Spook Haven built on its strengths – and resolved some shortcomings – for an even better experience.

Spook Haven offers short line VIP passes, as well as $1 glow necklaces for folks who don’t want to be touched by scare actors. Tickets are occasionally discounted as per themed weekend promotions. I grabbed a VIP pass on opening night and happened to be the first one through. Lucky me!

For 2015, Spook Haven rethemed itself into a haunted school. In the process, it upped the quality and consistency of its content. Every room is richly developed, with detailed scenery enhancing the personalities of the resident characters. Spook Haven also upped the “wow” factor, with large animatronics beautifully integrated for maximum impact. One of my favorite rooms exemplifies elegant simplicity, with unique miasmic lighting and a layout drawing me right into its show piece.

Spook Haven’s pacing enhances its overall effect. Each room encourages you to enjoy its detail and tentatively sneak forward. Characters are all about the of slow…creepy…draw-in…and BOO! I love this variation of intensity. The contrast between relative calm and aforementioned BOO! makes the jump scares more effective.

The new theme also brought some revisions to Spook Haven’s layout. I was a bit bummed to see the crawl tunnel go, especially because scare actors would grab people’s legs to hilarious effect. But the new layout is an effective tradeoff, letting you interact with space in a way that wasn’t possible with the old setup.

As before, Spook Haven’s actors are enthusiastic and engaging. I especially loved the ghoul in charge of line pulsing, who is quite the natural showman. He kept teasing the young girl in my group – apparently she looks like she spends a lot of time in detention. Line Ghoul also had a drum that he periodically pounded for a nice jump scare in the cavernous entrance hall. Interaction within the haunt involved a few well-timed hits of surprise cold water – awesomely disgusting when you’re on edge.

One of the others in my group thought Spook Haven was rather short. I didn’t mind. I once went to a haunt that advertised its run time, and its purported hour of terror was about five minutes of rubber mask jump scares in a bleak and dull outdoors. I would much rather see a brief, well-realized attraction than a boatload of pointless padding.

Spook Haven is a great local haunt. It maintains its own personality, shows clear vision for improvement, and works hard at making the most of its space and resources. Say hello to my new yearly tradition.

Read more about my work in general or in-progress novel.